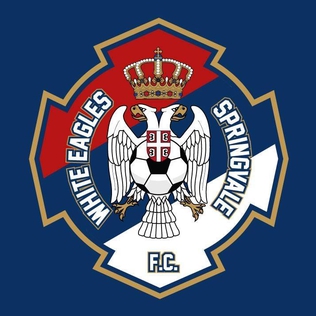 Springvale White Eagles Football Club is a semi-professional Australian soccer club based in Melbourne, Victoria currently playing in the NPL Victoria 3. Founded by Serbian Australians, they play at the Serbian Sports Centre in Keysborough, Victoria.

Springvale White Eagles Club was formed in 1975 as Springvale United, and have been known by their current name since 1995.

In 2002 White Eagles got into the State League Cup Final, losing 4–2 to Westvale.

The club was promoted to the Victorian Premier League in 2010, but suffered relegation in their first season in the top flight in the following year.

In 2012 Springvale were relegated from State League 1, having finished bottom of the league with just 1 win in 22 league games. − They took out the State League 2 South-East title the following season, pipping Dandenong City SC by one point.

The club entered the National Premier Leagues Victoria 2 division for the 2014 season, the new second tier of soccer in Victoria. The club finished the season in 12th place in the 14 team league, just avoiding the relegation playoffs.

In 2015, the NPL 2 was split into an East and West division with the White Eagles competing in the East division, finishing in nineteenth place overall in the NPL1 league system. Late in October 2015, head manager Zlatko Mihajlović resigned from his position. Shortly after, Mihajlović was replaced by Boyan Mitkov as the new senior head coach. Springvale then lost key player Šimo Jovanović to Kingston City. Jovanović had spent his entire career with the White Eagles, progressing through the youth system to eventually become the club's captain. On 12 April 2016, it was announced that Mitkov and his assistant Gus Caminos (who were winless in their first seven league games in the NPL2 season) had resigned from their positions, with former White Eagles player Nik Kovacevic announced as the replacement. Springvale subsequently finished the season in 6th place in the NPL2 East, its second best-ever finish in the NPL2 competition. In November 2016, head coach Kovacevic departed the club to return to Pascoe Vale as a senior assistant coach.

Springvale White Eagles appointed former Altona Magic coach Vlado Tortevski as their new manager for the 2017 NPL2 season. Despite winning three of their opening four NPL2 league games, Tortevski's side then won just one of the following ten, leading to the departure of the head coach in May 2017. The White Eagles finished the season in 7th place.

For the 2018 season, Springvale reappointed former club coach Nik Kovacevic to lead the team, and had a total of 7 key signings in the off-season. This included the experienced central defensive partnership of Pavle Durkic (formerly at Whittlesea Ranges FC) and Milos Tošić (formerly at West Adelaide SC). Also adding to the squad were Andy Kecojević, Marcus Dimanche, Delarno Pharoe, Slaven Vranešević and Englishmen Luke Barrow. With the mid-season loss of Captain Dejan Erakovic the Eagles brought in other key signings to its squad, including Bonel Obradović, Nemanja Lojanica and Nenad Nikolic. The Eagles finished the 2018 campaign in fourth place in the NPL2 East, its best finish since the inception of the NPL in 2014.

In 2019 the club finished in last place, with just four wins in 28 games, and were relegated to NPL3 for the 2020 season. Head coach Nebojsa Vukosavljevic resigned after the club's relegation, with Springvale appointing former Socceroo John Markovski for the 2020 NPL3 campaign.