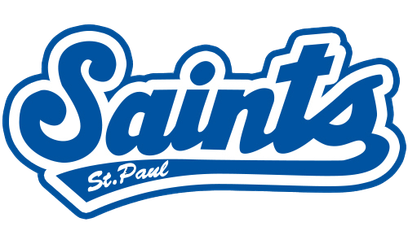 The St. Paul Saints are a Minor League Baseball team of the International League and the Triple-A affiliate of the Minnesota Twins. They are located in Saint Paul, Minnesota, and have played their home games at CHS Field since 2015. They previously played at Midway Stadium from 1993 to 2014.

From their founding in 1993 through 2020, the Saints were an independent baseball team with no affiliation with Major League Baseball (MLB). They played in the Northern League from 1993 to 2005 and the American Association of Independent Professional Baseball from 2006 to 2020. The Saints became an MLB-affiliated team in conjunction with the reorganization of the minor leagues beginning with the 2021 season. They were placed in the Triple-A East, but this was renamed the International League in 2022.

Before the arrival of the Minnesota Twins in 1961, there was a long history of minor league baseball teams called the St. Paul Saints, as well as their crosstown rivals the Minneapolis Millers. One incarnation of the Saints participated in the Union Association, a short-lived major league, in 1884. A second incarnation was active in the Western League from 1894 to 1899, and became a forerunner of the modern Chicago White Sox. The third and most long-lived incarnation of the Saints was active in the American Association from 1915 to 1960.

As described in Lee Allen's book, The American League Story (Putnam, 1962), the team began as the Sioux City Cornhuskers franchise in a minor league called the Western League. This circuit had reorganized itself in November 1893, with Ban Johnson as president. Johnson, a Cincinnati-based reporter, had been recommended by his friend Charles Comiskey, former major league star with the St. Louis Browns in the 1880s, who was then managing the Cincinnati Reds. After the 1894 season, when Comiskey's contract with the Reds was up, he decided to take his chances at ownership. He bought the Sioux City team and transferred it to St. Paul, where it enjoyed some success over the next five seasons.

Another team called the Saints played Minor League Baseball in the American Association from 1901 to 1960. The Saints finished first in the American Association nine times, and won the Little World Series in 1924. During this period, the Saints were a farm club of the Chicago White Sox (1936–1942), the Brooklyn Dodgers (1944–1957), and the Los Angeles Dodgers (1958–1960). The Saints played streetcar home and away double headers with their local rivals, the Minneapolis Millers. When the Minnesota Twins came to town in 1961, the Saints became the Omaha Dodgers while the Millers ceased operations and their role as affiliate to the Boston Red Sox was filled by the Seattle Rainiers. Lexington Park served as the Saints' home stadium for most of those years.

During the six decades of the original American Association minor league, the Minneapolis Millers and St. Paul Saints engaged in vigorous rivalry known as the Streetcar Series. This series has been documented in a book by Rex Hamann entitled The Millers and the Saints, Baseball Championships of the Twin Cities Rivals (2014).

The current inception of the St. Paul Saints was formed in 1993 in the Northern League, one of several independent leagues not affiliated with Major League Baseball. The Saints are known for promotions that are sometimes over-the-top even by the standards of Minor League Baseball. In this regard, Mike Veeck, formerly the team's principal owner and still owner of a large interest in the team, is seen as following in the footsteps of his father Bill Veeck, who was famous for conceiving outlandish promotions as an owner of the major league St. Louis Browns, Cleveland Indians, and Chicago White Sox. The current majority owner, Marvin Goldklang, also owns a stake in four other Minor League Baseball teams: the Fort Myers Miracle, Sioux Falls Pheasants, Hudson Valley Renegades, and Charleston RiverDogs. Comedian and actor Bill Murray is also a part owner.

Despite the considerable naysaying at their inception, the Saints became one of the most successful teams in the Northern League and all of independent baseball. From 2002 to 2004, the Saints saw severely reduced attendance, owing partially to renewed interest in the Minnesota Twins of Major League Baseball, who won the 2002, 2003, and 2004 American League Central Division championships. In spite of an initially cool, if not outright hostile reception, the Saints and their major league neighbor (less than 10 miles (16 km) away) have worked together for several years to promote the sport of baseball.

The Saints have figured prominently in the creation of modern independent baseball. The team has been featured in books (Rebel Baseball by Steve Perlstein, 1993; Slouching Toward Fargo by Neal Karlen, 1998) and a cable network series (Baseball, Minnesota, FX Network, 1996–97). Mike Veeck wrote a book that covered the mantra "Fun is Good" (2005) and describes the business approach he has used for many years. The team's history is also featured in the documentary film For The Fun Of The Game, which was released in 2018.

On May 31, 1997, the Saints became the first professional men's baseball team since integration to have a female on their roster. Ila Borders, a pitcher, played with the team out of the bullpen for a month before being traded.

On September 29, 2005, the Saints left the Northern League, along with the Lincoln Saltdogs, Sioux City Explorers, and the Sioux Falls Pheasants to start the American Association for the 2006 season.

In June 2009, the Saints began a push to build a new stadium in Downtown Saint Paul. The proposed 7,500-seat stadium would be located in the Lowertown neighborhood near a planned maintenance facility for the METRO Green Line light rail. The city of Saint Paul requested $25 million in its 2010 bonding wish list to the Minnesota Legislature.

During their final 5 years in the American Association and their first 5 years in CHS Field, the Saints consistently led the league in attendance averaging more than 8,000 fans in the regular season from 2015-19.

In 2020, the Saints competed as one of six teams in a condensed 60-game season as a result of the COVID-19 pandemic. They played much of their season away from their home stadium, CHS Field, instead being based at Sioux Falls Stadium, sharing a home field with the Sioux Falls Canaries. On August 4, 2020, however, the Saints returned to play at CHS Field.

The beginnings of a closer relationship with the local Major League Baseball franchise, the Minnesota Twins, came in the summer of 2020. Due to the pandemic, the 2020 MLB season was modified in several ways, including the cancellation of the 2020 Minor League Baseball season. Because of this, teams were allowed to use taxi squads located at nearby facilities where non-active minor league players were allowed to train. The Twins made use of the Saints' CHS Field facilities as home for their taxi squad.

Due to the 2021 full-scale reorganization of Minor League Baseball, there was much speculation as to what would happen to independent leagues such as the American Association and specifically the Saints. On November 11, 2020, it was reported that the Minnesota Twins ended their 18-year affiliation with their Triple-A affiliate, the Rochester Red Wings. At this time it was also reported that the Saints were a front-runner to be the Twins' new Triple-A affiliate. The main barrier to a deal was said to be the $20 million fee required for affiliation. The Twins aided in this by becoming minority shareholders in the Saints and placing their Triple-A affiliation in St. Paul beginning with the 2021 season. The Saints were organized into the Triple-A East. At a distance of 12.9 miles (along Interstate 94, including surface streets), CHS Field is the closest Triple-A ballpark to its MLB parent team.

The Saints began competition as a Twins affiliate on May 4, 2021, with an 8–2 loss to the Omaha Storm Chasers at Werner Park in Papillion, Nebraska. St. Paul ended the season in third place in the Midwestern Division with a 61–59 record. No playoffs were held to determine a league champion; instead, the team with the best regular-season record was declared the winner. However, 10 games that had been postponed from the start of the season were reinserted into the schedule as a postseason tournament called the Triple-A Final Stretch in which all 30 Triple-A clubs competed for the highest winning percentage. St. Paul finished the tournament tied for seventh place with a 6–4 record. In 2022, the Triple-A East became known as the International League, the name historically used by the regional circuit prior to the 2021 reorganization.